What to do About Receding Gums

The expression ‘long in the tooth’ is used to describe someone who is getting older. The idea here is that receding gums, which make the teeth look longer, is synonymous with age and something that is nigh inevitable with the passing of the years.

Most of us can accept this to a degree but the frustration comes when we start to see this deterioration at a younger age. When you’re just in your 20s, 30s or 40s and you see your gums starting to disappear this can be worrisome as well as not particularly attractive. We shouldn’t have to put up with disappearing gums at such young ages, so the question is: what’s causing it and how can you slow it down? 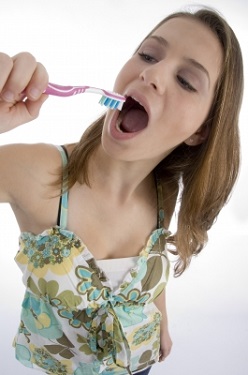 One of the biggest causes of prematurely receding gums is brushing too hard. Of course we brush our teeth to try and improve our oral hygiene but unfortunately it’s all too easy for us to get somewhat overzealous and the result is that we end up brushing away our gums. At the same time, we can also this way end up brushing off our enamel which leaves the teeth far more susceptible to future damage. How do you know if you’re brushing too hard? One sign is that the teeth are more worn on one side – probably the side that’s opposite to your dominant hand where you will be capable of applying more pressure. A quick fix? Swap which hand you brush with! Try using soft bristle toothbrushes or electric toothbrushes, but keep in mind that you don’t need to apply pressure at all when using these.

The bigger concern is that you may have a gum infection which could also be responsible for the deterioration you’re seeing. If this is the case, then you may find that there is also some discoloration around the area that’s affected. You can try killing off a gum infection by using a mouthwash such as Corsodyl or Listerine, though it’s always best to get professional advice first.

What You Need to Know

The good news is that your gums can recede quite far before you’re at risk of losing your teeth. Remember: these are held in by strong roots as well as being attached to the teeth on either side which brace them in place.

The bad news? Your gum does not heal or regenerate itself and in other words, any damage that happens to it, will remain leaving your gums exposed. This can increase your chances of getting an infection or of having a build-up of plaque. Likewise, it can expose your root which will become sensitive to cold or sweet. Dentists will often recommend a side filling at this point which involves attaching a filling to the outside surface of the tooth. Experimental procedures involving taking tissue from the roof of the mouth also exist, though they are not yet widely available.